Located on the banks of River Sutlej, Ludhiana fascinates everybody with its serene and charismatic beauty. Being the industrial hub of Punjab and holding a lot of historical significance in the heritage of Punjab, Ludhiana has a number of tourist attractions like museums, forts, gardens and most prominently, religious places.

The temples in Ludhiana are one of the most sacred and holy shrines where devotees come every year with a view to proffer their pious dip to the Almighty. It is a source of immense peacefulness and sanctity for every visitor. All the temples in the city of Ludhiana are followed by a rich historical legacy which is followed by the devotees unquestionably. For all the theists, temples are a sanctified pace with its celestial blessings. 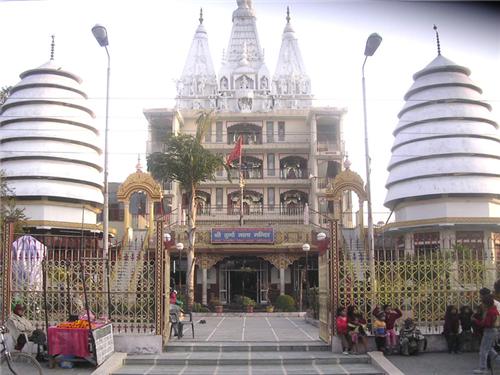 If you are on a tour to the famous city of Ludhiana, you must have these temples on your itinerary. For your convenience, we have provided a description about some of the prominent temples in Ludhiana.

Shri Krishna Mandir is the biggest and the most famous temple in the city of Ludhiana. Situate in the Model Town area, the temple is very beautifully constructed in an area of 500 square yards where more than 500 statues have been put up. The primary attraction of this temple is the statue of Lord Hanuman with a height of 37 feet. Shivratri, Dushehra and Janam Ashtami – these three festivals are celebrated with utmost zeal and enthusiasm in this temple.

The temple administration also runs a charitable hospital where the poor patients are given medical help along with free operation and medicine facilities.

Shri Ayappa Temple, situated in the city of Ludhiana, is dedicated completely to Lord Ayappa. Apart from this, the temple also has four more temples inside the complex which are devoted to Lord Shiva, Lord Ganesh, Lord Vishnu and Goddess Devi Mata.

This Shiv Mandir was build around a century ago and is situated in Old Ludhiana. Devotees come to this temple early in the morning and offer ‘ber’, water and milk to Lord Shiva. Shivratri festival is celebrated with great devotion and zeal in this Sangalan Wala Shivalaya Mandir.

Shri Radha Krishna Mandir, or Govind Dham, is a magnificent temple dedicated to Lord Krishna. The temple is situated on Hambran Road, Ludhiana. The mandir has eye catching idols of Lord Krishna and Radha. Near thetemple, you can also find a large cow shed (Goshala).

Apart from the above mentioned temples, there are a few other temples in Ludhiana like: