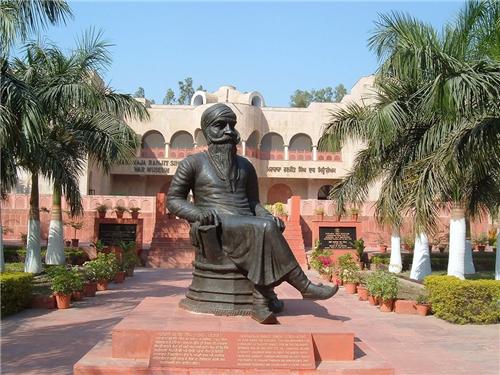 Located on the GT Road, i.e. NH-1 from Ludhiana to Amritsar, near Hotel Amaltas, about 5kms distance from Ludhiana Railway Station, the War Museum was established in the year 1999 in a vast area of 4 acres. At the main entrance gate, you can see a huge figurine of Maharaja Ranjit Singh sitting conceited and glorious on a throne. You can also find models of tanks, anti aircraft gun, apec car, a sukhoi fighter plane, car scout, INS Vikrant on both sides of the statue of Maharaja Ranjit Singh.  After entering the hall, at the right side, you will find the pictures of those Punjabis who have been awarded with Vir Chakra, Mahavir Chakra and Paramvir Chakra. The left hand side of the hall bears the pictures of the Generals, Air Chief Marshals and Admirals who belong to Punjab.

The War Museum has different galleries that pay a tribute to the bravery of the soldiers. the details about some of these galleries are given below.

The History Gallery of the War Museum show evidences of the scene of the Battle of Aliwal, Battle of Panipat - both I and II, as well as the blow up of the war between Ram and Ravana, Sardar Baghel Singh and Maharaja Sher Singh, Porus and Alexander and many more. The Gallery also displays the portraits of Nawab Kapur Singh, talking army of Krishna, Sikh, Mughal and Gupta periods. There is even a provision for multimedia kiosk in the gallery for providing in depth information to the tourists.

The War Heroes Gallery puts on view the busts and portraits of the army force of Punjab who won in the battles of 1948, 1965 and 1971. The gallery exhibits about 6 busts of the officers who had obtained the highest military honor award – The Victoria Cross.

This gallery displays the entire depiction of the Kargil war. It exhibits a brief history of Kargil, Darass, Kaksar, Batalic and Maskhoh Valley region along with mapping and a huge explode showing the real view of the war. The Gallery also presents a scene of ‘Operation Vijay’ and the portraits of the heroic award winners. This gallery also has the provision of a touch screen multimedia kiosk to provide elaborative description to the visitors.

The War Museum of Ludhiana also conducts light and sound shows in the hall on a regular basis. This show narrates the tales of courageous Punjabi soldiers in the struggle for independence.