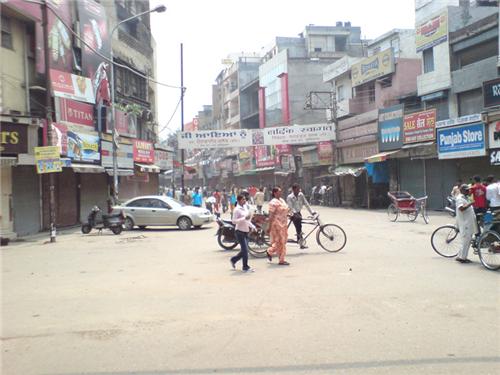 Chaura Bazaar, basically, is an ancient market since the 19th century. Even now, some old buildings can be located in the narrow lanes of Chaura Bazaar. Chaura Bazaar was set up on Sutlej River’s bank in Ludhiana. In the literal sense, the ‘Chaura Market’ means ‘Wide Market.’ In the earlier times, the streets of this market seemed to be very wide. Thus, its name turned out to be Chaura Bazaar. However, with the ever increasing population in Ludhiana city, the streets gradually started to become narrow to the extent that it is quite difficult to pass through it during the peak hours of the day. Even so, it is thronged by people almost every time.

Chaura Bazaar is a hotspot for the people of Ludhiana. Crores of business transactions take place in this market on a daily basis. Although the shops are closed on Sundays, still you can find a huge rush in the market for the Sunday Bazaar. Chaura Bazaar is also famous for ages old shops like Khushi Ram’s Sweet Shop and Lyal Book Depot.

Chaura Bazaar has one of the biggest drug markets in the state of Punjab, known as the Pindi Street. It is a common saying that if you are unable to find a particular thing in the entire Ludhiana, you will definitely find it in Chaura Bazaar and that too at almost half of its price.

The old city of Ludhiana was confined to Daresi, Ghas Mandi, Purana Bazaar and Chaura Bazaar. Earlier, Ghas Mandi was mainly known for the sale of Ghas.

Although people have started relocating their shops to other modern markets like Ghumar Mandi, Cemetry Road, Sarabha Nagar, Model Town, Pakhowal Road and the Mall, still you can find some old business running from very old generations in the Chaura Bazaar.

Some of the famous shops in Chaura Bazaar are given below:

Explore more about Areas and Localities in Ludhiana